As the world begins its journey to the “new normal,” management of highly dense spaces will need to operate in a radically different way. How can we ensure some level of normalcy as we begin to interact with the world at large? One way to help manage and enforce social distancing with larger groups of people may be through “Bubble Groups.” By organizing people flow based on groups rather than individuals, management of spaces like offices, museums, and theaters could ensure a level of service that would allow them to function. 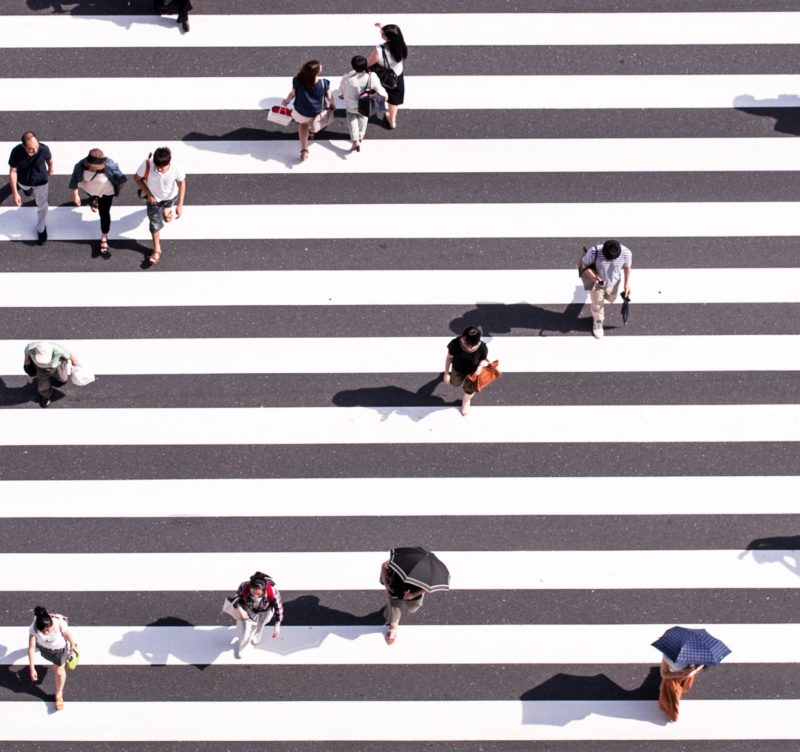 For additional efficacy, Bubble Groups can be used together with the “Drum Buffer Rope” concept, a well-known idea in lean manufacturing that helps to utilize bottleneck resources to their fullest extent, and thus increase capacity of spaces and services. The basic idea behind the concept is to ensure the bottleneck resource utilized as much as possible by placing a small queueing space before it, as explained in the animation below.

Meanwhile, Bubble Groups would work by separating crowds into groups and maintaining social distancing between these groups, while persons within the same Bubble Group would be able to be closer than 6 feet. By doing this, Bubble Groups would allow us to socialize at places we like to visit with family and friends while staying socially distant from others. People would be organized into groups depending on the nature of each space. For example, in a museum, a bubble group might be those who live together, such as families or friends who are visiting the museum together. In a restaurant kitchen, this might be your shift coworkers. One thing of importance to note is that Bubble Groups should be kept small (i.e. less than 10).

By reorganizing individuals into Bubble Groups in re-opened public places, management can improve service capacity of public resources and therefore the level of service for the public utilizing these places.

In the few examples below, we can illustrate what this might look like in a variety of public settings:

Museums and Cultural Sites: As explained in the previous blog, Bubble Groups at museums would help increase visitor capacity without endangering visitors. In this case, each family or group of friends visiting a museum would be identified by a group ID (be it a number, color, graphic), with each individual in the group given a number (1 out of 4, 2 out of 4, etc). Throughout their stay at the museum, groups would move around the museum together, while making sure to stay at least 6 feet away from other groups. This way, museums could more easily enforce socially distancing between visitors while increasing the amount of people who can enter the museum. The following animation shows how this increase capacity for a must-see exhibit.

Movie Theaters, Concert Halls, and at Events: In this case, Bubble Groups might allow for an otherwise cancelled or digital event to meet in person. Like museums, groups would enter and go through security or bag checks together. Group members would then be seated together, while other groups would be seated at least 6 feet away.

Restaurants and Cafes: In this case, the Bubble Group idea can directly be applied to staff. A crew working in the same shift would be considered one Bubble Group. Although they will continue to follow hygiene rules set by medical authorities, the same group should work shifts together (without maintaining social distancing) and be tested together, hence allowing for earlier detection and easier tracking and tracing if one person in the group was to fall ill. Organizing shifts by groups would allow for safer work environments, because management would immediately know who was working with the infected individual, rather than having to go through the whole schedule to see who had worked with the infected person.

Offices: Office workers who must work together in close proximity due to the nature of business could be made to be a part of the same Bubble Group. Each Bubble Group would be sure to arrive at the office at the same time and use the same elevator. Groups could be allowed to enter the office on alternating days if space limitations allow only one group to work together in a given day.

There is no doubt that the recent pandemic will reshape the way we interact in public spaces for the months to come. Using Bubble Groups can help us ease back into normalcy for a variety of different spaces, as shown above. Bubble Groups are not only limited to visitor flow organization; Bubble Groups can be the foundation for businesses looking to keep their workers safe within offices, restaurant kitchens, and factories. Specifically in these settings, Bubble Groups could play an important role in keeping workers safe by limiting the amount of people workers come into contact with daily. It could also ease contact-tracing efforts, in the case of a worker becoming ill. By methodical use of group bubbles, management can ensure safety while being able to open their doors to the public. As the world begins to open up its doors, it is critical that adequate planning be done to guarantee everyone’s safety, both visitors and workers alike. By reorganizing with Bubble Groups and utilizing the Drum Buffer Rope concept, we may be able to once again experience cherished public spaces without endangering others.

Stay up to date KCG’s blogs here and for a more generalized plan on how to deal with crowding at museums, check out our previous blog.